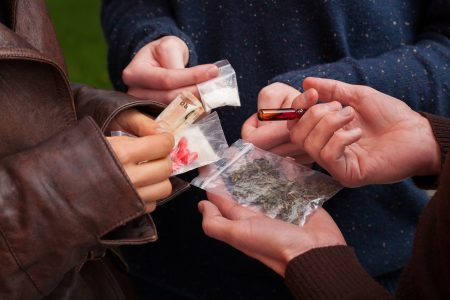 Drug trafficking is the term used in Florida’s criminal law to describe the sale, delivery, manufacture, or possession of illegal drugs and controlled substances over a certain weight or quantity. Politicians focused on passing legislation favoring Florida’s “War on Drugs” have created severe mandatory minimum penalties for drug trafficking offenses. The punishment for drug trafficking in Florida ranges from a minimum of three years to a maximum of a life sentence in prison, depending upon the quantity and type of drug.

Originally, Florida Statute 893.135 was enacted with the specific purpose of targeting high level drug dealers, or “traffickers.” This statute provides that if a person is found with a certain quantity of a drug in their possession, the person is considered to be “trafficking” in the drug trade. Such a designation is often unfair. This is particularly true when there is an absence of any evidence suggesting that the person was engaged in the regular sale or delivery of drugs.

If you have been arrested for a drug trafficking offense in St. Petersburg, Clearwater, or other area of Pinellas County, you need to consult with an experienced criminal defense attorney as soon as possible.

Some of the most common drug trafficking charges in Pinellas County include:

Individuals charged with drug trafficking offenses arising out of the St. Petersburg & Clearwater area face severe penalties. These include lengthy mandatory prison sentences, forfeiture of assets, and substantial fines. Furthermore, a felony conviction for drug trafficking can follow you for the rest of your life, making it difficult to secure lawful employment.

Florida Statute 893.135 Provides Minimum Mandatory Penalties If You Are Convicted

“Mixtures” and Weighing the Drug for Mandatory Sentencing Purposes

Illegal drugs are rarely purchased on the street in pure form. Rather, they are more commonly adulterated. It is common practice to dilute, “step on,” or cut drugs in order to realize a greater profit margin. However, under Florida law, the purity of the drug you are charged with possessing is irrelevant. Florida Statute Section 893.135(1)(l)(6) provides that:

It is also very important to understand that, when dealing with prescription medication in pill or capsule form, the total weight of the pills themselves is used to determine whether there is a threshhold trafficking amount. Because each pill may easily weigh a half gram or more, it is very easy for even a relatively small number of pills to transform a “simple possession” case into a trafficking in controlled substance charge. Furthermore, the amount of the “active” substance at issue in the pill may only represent an extremely small portion of the total weight. Nevertheless, under Florida law, it is the total weight of all the pills that controls. See the adjacent chart to the right for several examples.

Conspiracy to Traffic in Drugs or a Controlled Substance

“Any person who agrees, conspires, combines, or confederates with another person to commit any act prohibited by subsection (1) commits a felony of the first degree and is punishable as if he or she had actually committed such prohibited act.”

This means that if you agree to sell or deliver 4 or more grams of oxycodone, but never actually follow through with that promise, you can nonetheless be charged and sentenced as if you had actually committed the crime of trafficking in oxycodone. The law of conspiracy is complex and the individual facts of each case require a careful analysis. The following factors are important considerations:

3.) Did law enforcement entice or initiate your participation in the conspiracy? (The defense of entrapment can sometimes be effective in “reverse-sting” cases where law enforcement acts as the proposed seller of the drugs).

We are former state prosecutors and seasoned criminal defense attorneys who are experienced in maneuvering through Florida’s complex drug trafficking laws. Depending on the facts of your case, we can consider some of the following strategies designed to circumvent or avoid the minimum mandatory prison sentence you may be facing:

Substantial Assistance – An Alternative to Prison

“The state attorney may move the sentencing court to reduce or suspend the sentence of any person who is convicted of a violation of this section and who provides substantial assistance in the identification, arrest, or conviction of any of that person’s accomplices, accessories, coconspirators, or principals or of any other person engaged in trafficking in controlled substances.”

This means that if you are facing a drug trafficking charge, the mandatory prison terms called for under Florida law may be waived if you provide substantial assistance to the police in the identification and subsequent arrest of other persons unlawfully dealing in the drug trade. Substantial assistance commonly entails more than just simply providing information to law enforcement. Rather, you will be called upon to work with an undercover police officer, make recorded phone calls, set up and negotiate “controlled buys” and at times even be required to wear a “wire” or concealed recording device.

A Defense Lawyer’s Participation in Substantial Assistance Negotiations is Critical

The decision to provide substantial assistance is obviously a difficult one. It should never be made without first careful consultation with your defense attorney and the exploration of other options. Properly performing substantial assistance requires the consent and approval of the State Attorney’s Office and is typically confirmed by way of a written contract. Thus, it is highly imprudent for an individual to casually or informally engage in substantial assistance discussions with law enforcement without the benefit of first having his attorney solicit the formal approval and endorsement of the prosecutor assigned to his case.

Don’t be misled by a police officer’s vague promise that he will “go to bat for you” or later “speak to the judge or prosecutor” if you help him. Keep in mind that a police officer’s power is limited only to arresting individuals. Once arrested, a Defendant is subject to a prosecution and recommended sentence designed solely by the prosecutor. The judge doesn’t generally entertain involvement of police officers in negotiated sentences, since the state of Florida is already represented by legal counsel in the form of a prosecutor. Thus, the only person truly “in your corner” or “on your side” is your criminal defense attorney. Your lawyer is the only person genuinely motivated to represent your best interests and who can lawfully present a negotiated sentence to the judge. The justice system in Florida is adversarial in nature. The police and the prosecution are not on your side, so don’t count on them to protect your best interests. 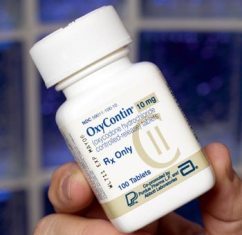 Addiction to prescription pills has become commonplace in our society. Individuals who were once legally prescribed a medication can often be driven to break the law in order to feed their addiction when their legal prescriptions run out. Because these individuals can build up a tolerance to the drug, they often require subsequent large dosages of a medication to achieve the same effect. As a result, a person suffering from an addiction will possess a larger quantity of the drug, even though it is purely intended for their personal use. However, when such an individual is caught with their personal supply, the sheer quantity of pills will typically lead to a drug trafficking arrest, rather than a more appropriate simple possession charge.

1.) We can urge the State to amend the charge to a more appropriate lesser offense of “simple possession” by pointing out that:

The Florida Office of Program and Policy Analysis and Government Accountability (OPPAGA) recently reported that convictions for “Trafficking” more than quadrupled between 2006 and 2013. The taxpayer cost of incarcerating a drug offender for a mandatory three year Florida state prison sentence is estimated to be $58,400. The argument for treatment rather than incarceration is compelling given these figures. It makes little sense to burden the taxpayers and the Florida Department of Corrections with the cost of a mandatory prison sentence when the original offense amounted to simple possession.

2.) We can file a Motion to Dismiss Your Drug Trafficking Charge

We can file a legal pleading arguing that Florida Statute 893.135 is unconstitutional as applied in your case because there was no intention on your part to sell or distribute the pills. Although Florida Statute Section 893.135 fails to define the term “trafficking,” Black’s Law Dictionary and appellate case law defines “trafficking as “trading or dealing in certain goods and commonly used in connection with illegal narcotic sales.” See also court commentary in Jordan v. State, 441 So 2d. 657 (Fla 3d DCA 1983).

In support of your motion to dismiss it can be pointed out that there is an absence of evidence to suggest that you intended to do anything other than ingest the drug. Further, that there is another Florida criminal statute already in place (simple possession) that prohibits the exact conduct for which you are accused. As a result, we can urge the Pinellas County Circuit Court Judge to find that the trafficking statute, as applied in your case, is overbroad and therefore unconstitutional.

If successful, a motion to dismiss will serve to terminate your prosecution for a trafficking offense and force the prosecutor to re-file the charge as a simple possession offense. This would avoid the otherwise harsh prison sentence you were initially facing. In the alternative, just the act of filing the motion could cause the prosecutor to take a fresh look at the unique set of facts and circumstances in your case (pointing to a possession motivated by addiction and limited to personal use). Such a more detailed review of your individual circumstances might give us leverage in convincing the prosecutor that the best interests of justice demand an amendment of the charge to the lesser “simple possession” offense coupled with substance abuse counseling instead of a prison sentence.

You need a local St. Petersburg / Clearwater attorney well familiar with the unique nature of drug trafficking charges and someone who is also experienced within our Pinellas County Criminal Court System. At your initial consultation we can discuss which options and strategies are best for you. We can also assist you in getting started on any counseling or treatment that you might need. Our office is quite familiar with those local addiction treatment providers that are favorably looked upon by our Pinellas County judges. An early coordinated strategy in your case may pay later dividends in achieving the best possible final outcome.